Class 9 Matter In Our Surroundings Notes

Matter In Our Surroundings Notes

Characteristics of Particles of Matter:-

We can change the state of matter :-

The intermixing of particles of two different types of matter on their own is called diffusion.

Boiling Point:- The temperature at which a liquid starts boiling at the atmospheric pressure is known as its boiling point.

Melting Point:- The temperature at which a solid starts melting to become a liquid at the atmospheric pressure is known as its melting point.

Interconversion of three States of Matter:- 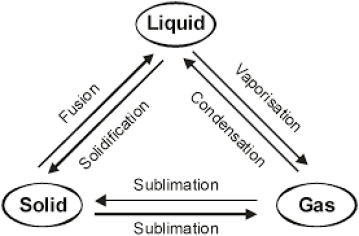 Fusion:- The process of change of solid into liquid state is known as fusion.

Sublimation:- The conversion of solid directly into gaseous state without changing into liquid state (or vice versa) is called sublimation.

Vaporisation:- The conversion of a liquid into gaseous state at its boiling point is called vaporisation.

The amount of heat energy required to change 1 kg of solid into liquid at atmospheric pressure at its melting point is known as latent heat of fusion.

The amount of heat energy required to change 1 kg of liquid into gaseous state at the atmospheric pressure at its boiling point is known as latent heat of vaporisation.

The conversion of a liquid into gaseous state at any temperature below its boiling point is called evaporation.

Factors on which rate of evaporation depends are:-

Differences Between Vaporisation and Evaporation:-

Formulas for interconversion of different units of temperature:-