Malleability:- The property of a metal by which it can be beaten into thin sheet is called malleability.

Ductility:- The property of a metal by which it can be drawn into thin wire is called ductility.

Sonority:- The property of a metal by which it produces a ringing sound on striking a hard surface is called sonority.

Lustre:- The shining property of metals is called lustre.

Reaction of metals with oxygen:-

Amphoteric oxides:- The metal oxides which react with both acids as well as bases to produce salts and water are known as amphoteric oxides.
Ex:- Al2O3 , ZnO etc.

Anodising:- The process of forming a thick oxide layer of aluminium on the surface of aluminium which prevents it from further corrosion is called anodising.

Reaction of metals with water:-

Reaction of metals with acids:-

Reaction of metals with solutions of other metal salts:-

The compound formed by the transfer of electrons from a metal to a non-metal is known as ionic compound. Ex:- NaCl, Na3PO4 etc. 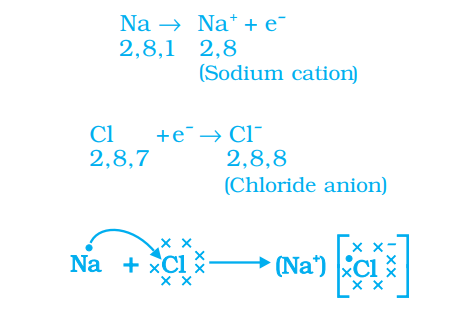 Minerals:- The naturally occurring elements or compounds in the earth’s crust are called minerals.

Ores:- The minerals from which the metals can be extracted profitably are called ores.

Gangue:- The large amount of impurities present in the ores are called gangue.

Roasting:- The process of converting sulphide ores into oxides by strongly heating in the presence of excess air is called roasting.

Calcination:- The process of converting carbonate ores into oxides by heating strongly in limited air is called calcination.

Extraction of mercury (Hg) from its ore cinnabar (HgS):-

Extraction of copper from its ore copper sulphide (Cu2S):-

Extraction of zinc from its ore zinc sulphide (ZnS):-

Extraction of zinc from its ore zinc carbonate (ZnCO3):-

The highly reactive metals are obtained from their compound by electrolytic reduction.

Anode mud:- The insoluble impurities that settle down at the bottom of the anode during electrolytic refining are known as anode mud.

The process of slowly eaten away of metals by the reaction of air, water and chemicals present in the atmosphere is called corrosion. Ex:-

Galvanisation:- The process of coating the metals surface with a thin layer of zinc to prevent corrosion is called galvanisation.

An alloy is a homogeneous mixture of two or more metals, or a metal and a non-metal. Ex:-