The ability of eye lens to adjust its focal length with the help of ciliary muscles is called power of accommodation.

The minimum distance at which objects can be seen clearly without strain is called least distance of distinct vision.

The farthest point up to which the eye can be see objects clearly is called far point.

The type of defect in which a person can see nearby objects clearly but cannot see far objects distinctly is called myopia.

Myopia is corrected by using concave lens of suitable power. The type of defect in which a person can see distant objects clearly but cannot see nearby objects distinctly is called hypermetropia.

Hypermetropia is corrected by using convex lens of suitable power. 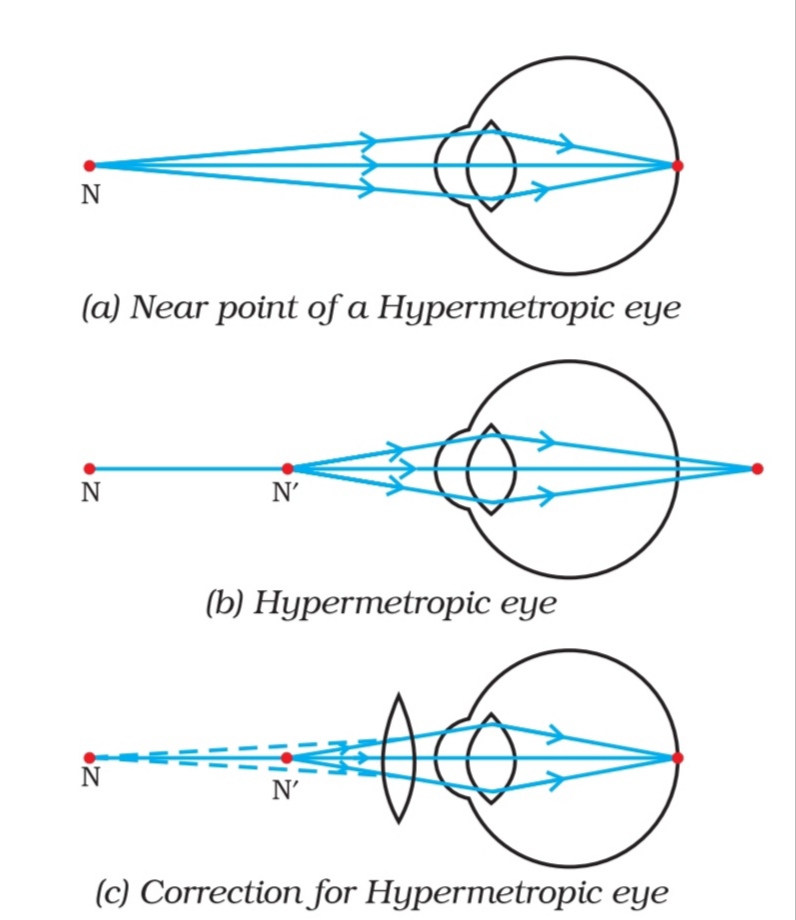 The type of defect in which a person at old age cannot see nearby objects as well as distant objects clearly is called presbyopia.

Refraction of light through glass prism:- 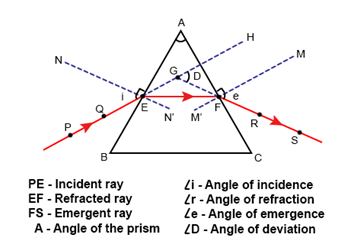 Angle of prism:- The angle between two lateral faces of the prism is called angle of prism.

Spectrum:- The band of seven coloured components of light is called spectrum.

Dispersion of white light by a glass prism:- 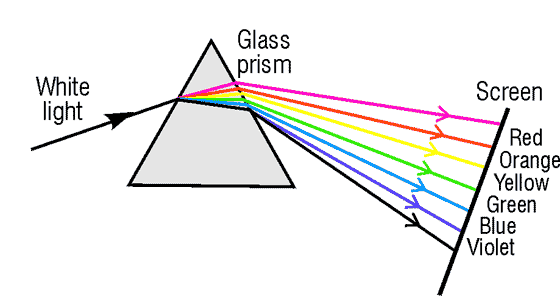 It is a natural spectrum appearing in the sky after a rain shower. A rainbow is always formed in a direction opposite to that of the Sun. 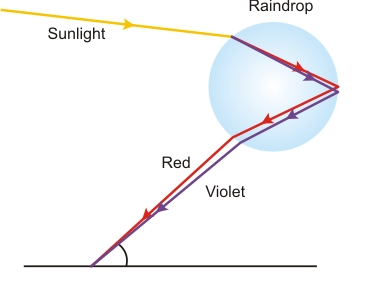 Three phenomena which are involved in rainbow formation are:-

The refraction of sunlight by different layers of atmosphere is called atmospheric refraction.

The refractive index of earth’s atmosphere increases from top to bottom. So, the light coming from a star near the horizon has to travel from rarer to denser medium & it bends towards the normal. As a result the star appears higher than its actual position.

Since the physical conditions of the earth’s atmosphere are not constant, so the light from stars appears to come from different directions. This results in fluctuation of apparent position of star. Also the amount of light coming from stars vary due to changing refractive index of atmosphere. So the stars sometimes appear brighter and sometimes fainter. These two effects are responsible for twinkling of stars.

When the sun is below horizon, the rays have to pass from rarer to denser medium. So rays bend towards normal. As a result, the sun appears higher than its actual position. So the sun rises two minutes earlier than actual sunrise and remains visible for about two minutes after the actual sunset.

Phenomena based on scattering of light:-

Tyndall effect:- The phenomenon of scattering of light by colloidal particles so that its path becomes visible is called tyndall effect.

Blue appearance of the sky:-

Reddish appearance of the sun at sunrise and sunset:-

During sunset and sunrise, the sun is near horizon and the the sunlight has to travel larger distance in atmosphere. Due to this most of the light of shorter wavelengths are scattered away by the particles and light of longer wavelengths reaches our eyes. This gives reddish appearance of the sun at sunrise and sunset.