Heredity:- The transmission of traits/characters from one generation to next generation is called heredity.

Genetics:- The study of heredity and variation is called genetics.

Dominant:- The characteristics which is expressed in an organism is called dominant.

Recessive:- The trait which is not expressed in an organism is called recessive.

Homozygous:- Homozygous means that the organism has two copies of the same allele for a gene.
Ex:- TT, tt

Heterozygous:- Heterozygous means that an organism has two different alleles of a gene.
Ex:- Tt

Phenotype:- The trait which is visible in an organism is called its phenotype.

Genotype:- The composition of genes present in an organism is called its gemotype.

Difference between Acquired and Inherited traits:-

The cross between two plants with one pair of contrasting characters is called monohybrid cross.
Ex:- Cross between a tall and dwarf (short) pea plant.

Seven pairs of contrasting characters are:-

The cross between two plants with two pairs of contrasting traits (characters) is called a dihybrid cross.

Gene:- Functional segment of DNA which carries information for 1 – protein is called gene. 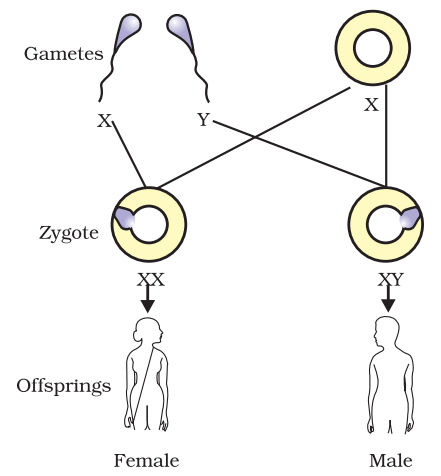 → In human body, there are 23 pairs or 46 chromosomes in which one pair is sex chromosomes.

Evolution:- The sequence of gradual changes that take place in an organism over a million of years and leads to the formation of new species is called evolution.

Speciation:- Origin of new species from the existing one is called speciation.

Speciation can take place through:-

Homologous organ:- The organs having similar structure but different functions are called homologous organ. Ex:- Forelimbs of bird and human.

Analogous organ:- The organs having different structures but similar function are called analogous organs. Ex:- Wings of bird and bat.

Fossils:- The preserved traces of living organism are called fossils.

Methods to estimate the age of fossils are:-