Force and Laws of Motion Notes

A push or pull on an object is called force.

A force can change-

The force exerted by one object on another object due to the physical contact between them is called contact force.

The force exerted by one object on another object without any physical contact between them is called non-contact force.

If the net force acting on an object is zero, then the forces acting on the object are said to be balanced.

If the net force acting on an object is not zero, then the forces acting on the object are said to be unbalanced.

An object remains in a state of rest or of uniform motion in a straight line unless or until an unbalanced force is applied.

Or, All objects resist a change in their state of motion.

The natural tendency of an object to resist a change in its state of motion or of rest is called inertia.

Inertia is classified as:-

The momentum of an object is defined as the product of its mass and velocity.

The force applied on an object is directly proportional to the rate of change of momentum in the direction of force.

Consider an object of mass ‘m’ moving in a straight line with initial velocity ‘u’. It is uniformly accelerated to final velocity ‘v’ in time ‘t’.

A/c to second law of motion,

or, F = k m a where, k is constant of proportionality

From second law of motion,

Here, we see that when external applied force is 0, then there is no change in its state of motion or of rest which is the first law of motion.

It states that every action has equal and opposite reaction.

Ex:- A forward force on the bullet and recoil of the gun.

Law of Conservation of Momentum:-

Mathematical Proof of Law of Conservation of Momentum:-

Consider two objects having masses mA and mB moving with initial velocities uA and uB respectively in the same direction such that uA > uB. After collision, let their final velocities be vA and vB respectively. 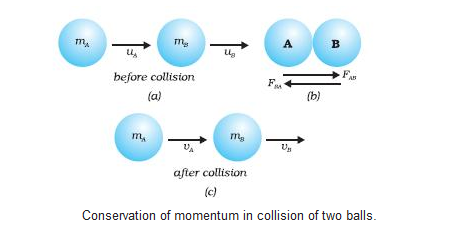 From 2nd law of motion,

From 3rd law of motion,